What better thing to do my first time in LA than the most touristy thing possible. Unruly Stowaway visits The Hollywood Walk of Fame on Hollywood Blvd.

What Locations I Saw (An Overview)

This article will detail the place I stayed, a few stops before my arrival to Hollywood Blvd, and my trek down it. During the walk I looked at some of the stars (although this article might be light on those. Who wants to live their life looking down?), visited the statue at the start of the Walk of Fame, Grauman’s Chinese Theater, The Hard Rock Cafe, Madame Tussauds, The Magic Castle Hotel, an overlook viewing of The Hollywood Sign, Donald Trumps vandalized star, Ripley’s Believe It or Not, The Hollywood Wax Museum, not one but two death museums, and more. Here we go.

Do you know what an Airbnb is? Basically, it’s when everyday people like you and me have a place they would like to rent out for a period of time, hotel style. I’ve stayed in these places before and for the most part they have all worked out well (except for that haunted one in Montana… and that Haunted one in Upstate New York…).

Anyways, I decided to go the Airbnb route because I’m not made of money, which by default makes me cheap. Hotels in the Beverly Hills area where my meeting was (the reason for the LA visit) were upwards of $200 a night, so Airbnb saved me a ton.

The Outside of the Airbnb 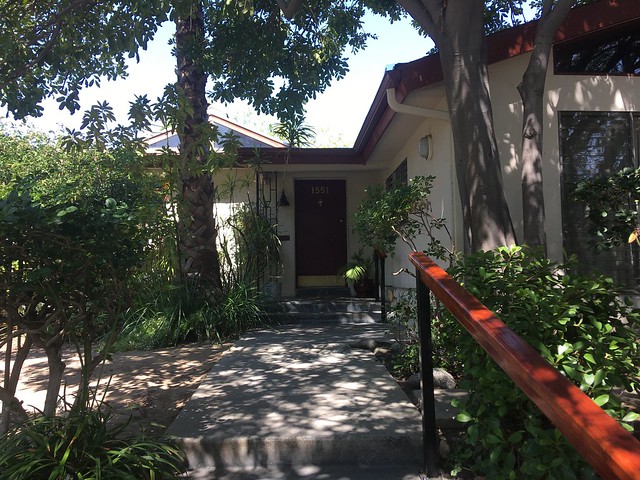 Here is the outside of the Airbnb, which was located in mid-Beverly Hills. Very Jungley.

The Front Door of the Airbnb 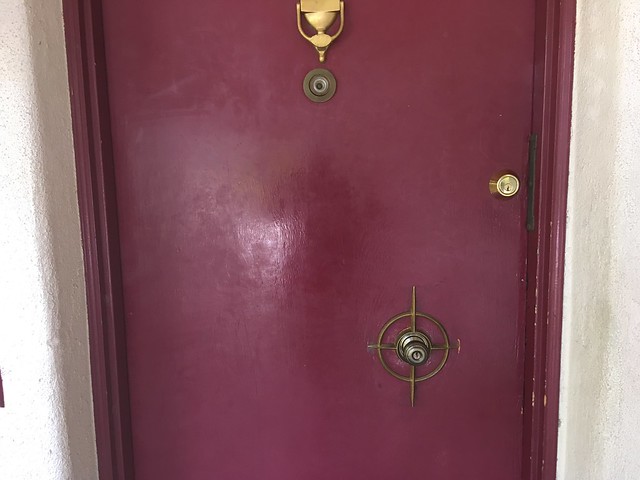 For some reason the knob is offset. I’ve never seen that. It looks semi-nautical, and I later found out the person whose home it was is a sailor. Or rather, has a sailboat. (He wasn’t a sailor by trade.)

The Inside of the Airbnb 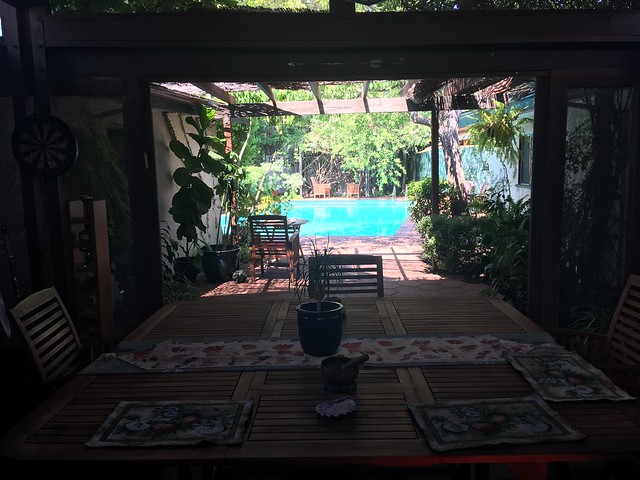 Here is the inside of the home — open concept patio. At night a skunk snuck in and almost sprayed me. (How long would I have needed to wait before being allowed on an airplane if the skunk succeeded?)

Getting Food Before The Action

I took an Uber up to Hollywood Blvd. The Uber pools are so much cheaper than the regular Uber X. The ride ended up only costing six bucks and only being about five minutes longer than if we hadn’t picked up an extra passenger. I arrived in the Walk of Fame area around noon so stopped for something to eat before getting to it. 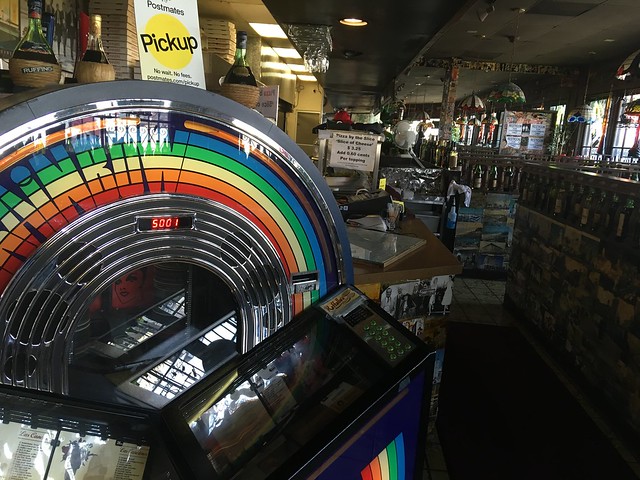 Stopped in this pizza place, which had a cool decor inside, but kinda shitty pizza. I think it might’ve been last night’s leftover pizza that they threw extra cheese onto to make it look fresh. Had I not had a good pizza slice somewhere the next day I would’ve left thinking that LA pizza was utterly hopeless. 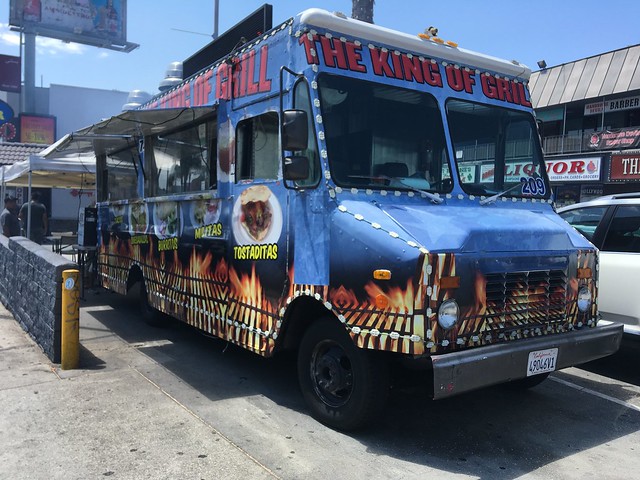 I ended up walking the wrong way and passing by this food truck. The aroma wafting from this truck smelled like some of the greatest food ever cooked. I wish I’d passed by this before the pizza place.

The Beginning Of The Walk of Fame

Where I started was a location on Google Maps that read “Beginning Of The Hollywood Walk of Fame.” Kind of an obvious choice to begin…

The Statue at the Start and a Few Stars 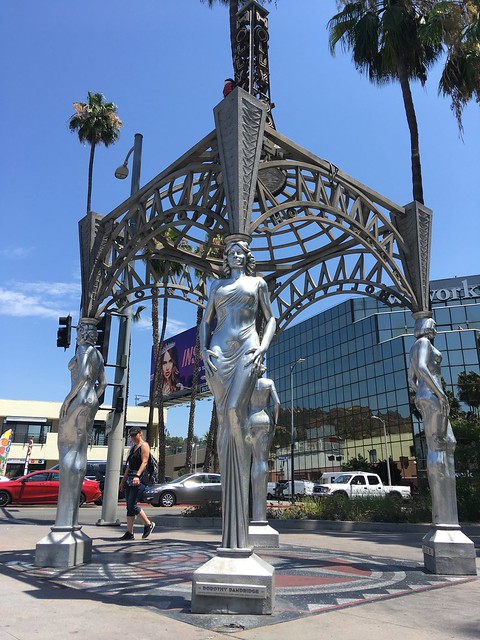 This landmark is at the beginning of The Walk of Fame and titled, “The Gateway to Hollywood“. Also in this area are stars for Elvis, and The Beatles. 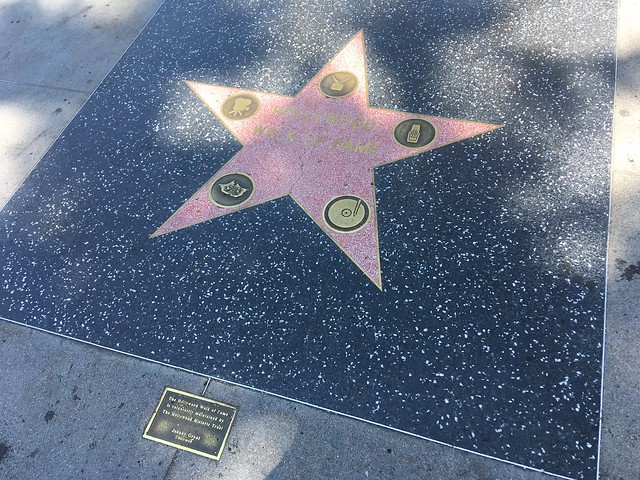 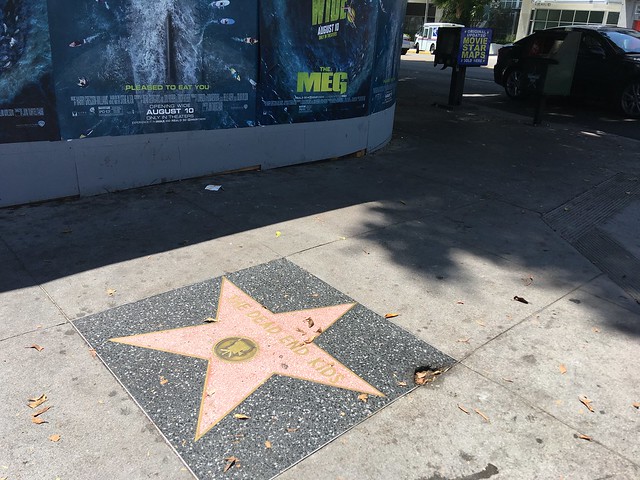 Crossing from the center island where the sculpture and ego star were, on the right side of the street we find the first star, The Dead End Kids. Placed all the way at one end for any particular reason, nah… 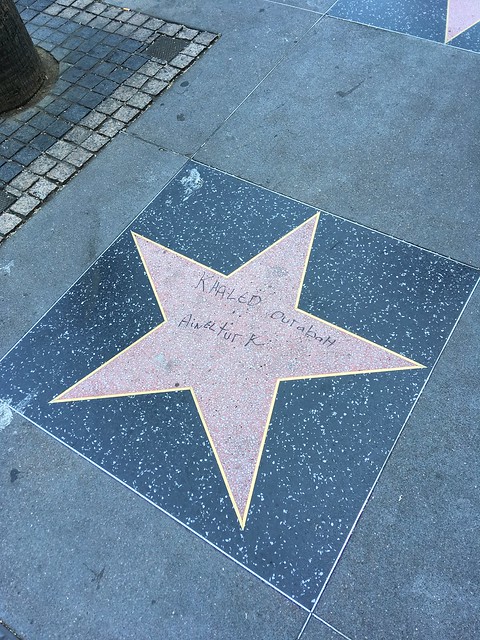 Something you may not know is that there are a ton of empty stars on The Hollywood Walk of Fame, just waiting for someone to be star-fuckable enough for the masses to idolize. Many of these stars were vandalized by people who thought it would be cheeky to create their own star. This was the first one of those that I came across.

Should I have gotten a maker and made a star for Unruly Stowaway?

Madam Tussauds, Grauman’s Chinese Theater, The Hard Rock and the rest of the block

From here we are going to venture along until the North Highland cross street seen in the map above. 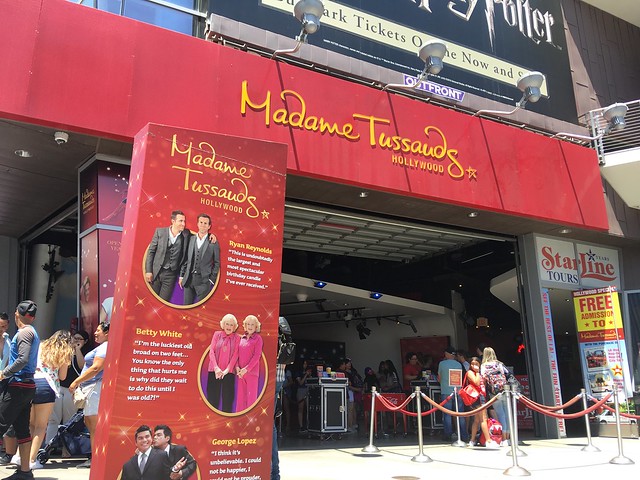 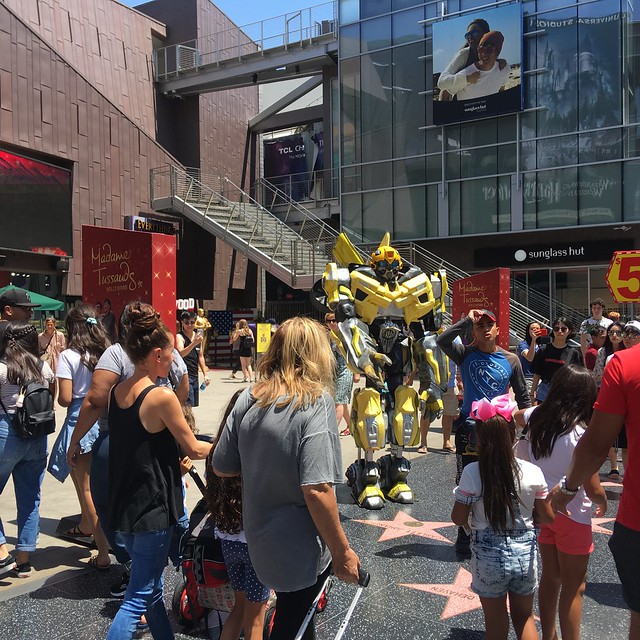 Outside of Madam Tussaud’s there were a lot of those people dressed in character costumes taking pictures for tips. This reminded me of Times Square in New York and The Vegas Strip. Above is a giant Transformer of some sort. I’m not up enough on my nerd culture to know which one, but I know it’s a Transformer. Note the man in the blue shirt and cap. He is yelling at me for sneaking the photo. 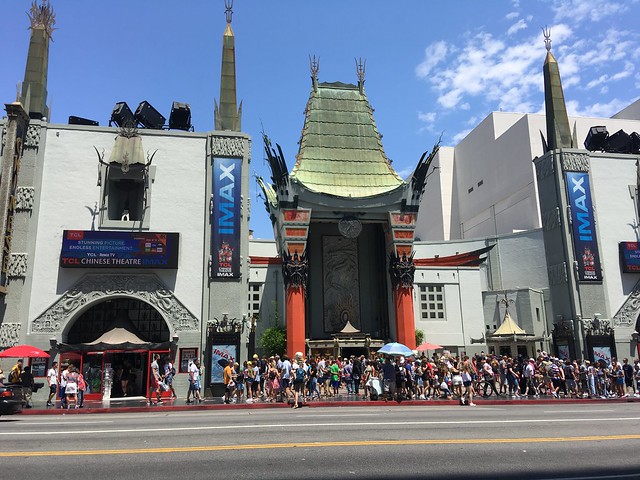 The photo here is the Famous Grauman’s Chinese Theater. This place was by far the busiest on the block, so I went over to see what all the hullabaloo was about. 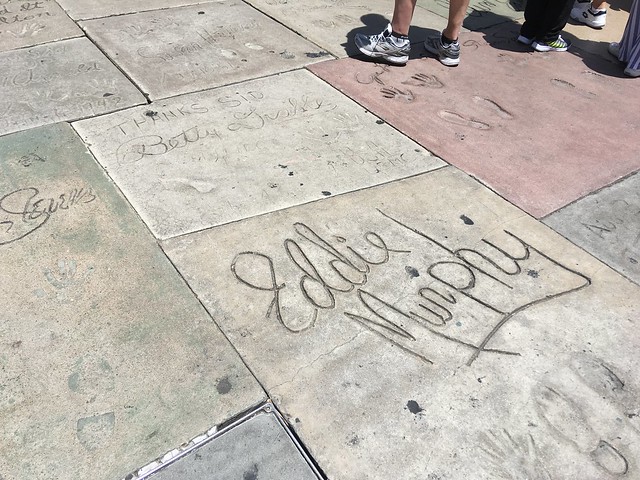 At one point in time I knew that outside Grauman’s there were a lot of signatures, hand and footprints of celebrities, but had forgotten. This was why Grauman’s was busy AF: people looking at all the different names and also matching up their own feet and hands. Above is a photo of Eddie Murphy’s signature and prints. 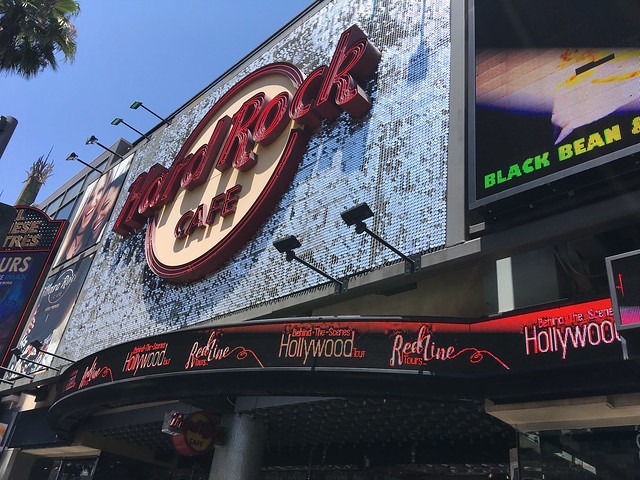 After Madam Tussaud’s I passed by The Hard Rock Cafe. Blaring from the speakers was Van Halen’s “Panama,” because of course it was… 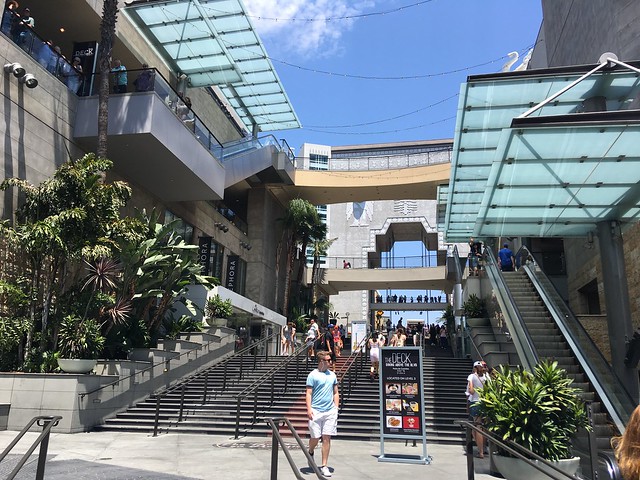 This is a photo of a large outdoor mall. From the bridges in the distance you can see The Hollywood Sign. 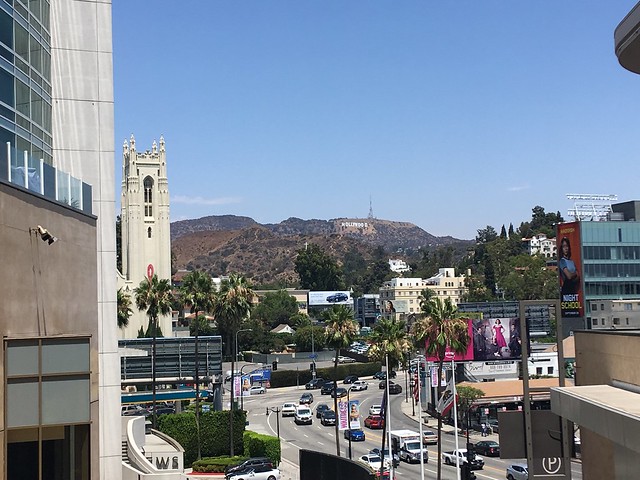 And here it is. Here is a view from one of those bridges. Still kinda far, but cool to see either way. 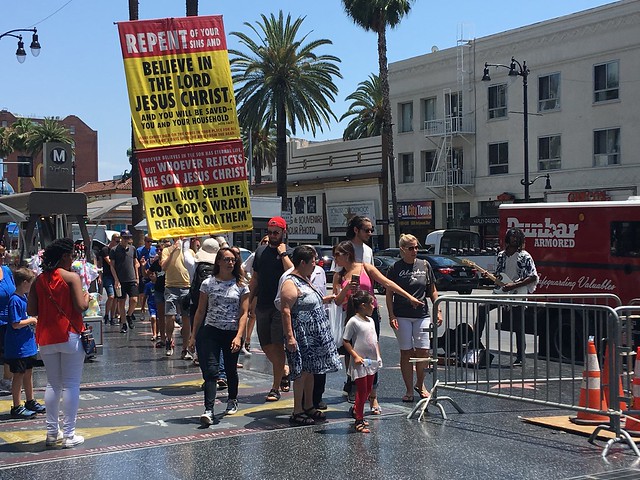 As I was walking back down the steps from the outdoor mall I heard the guy holding the sign, preaching quite loudly about the end of the world, and how if people don’t accept Jesus they’d go to Hell and blah blah blah. While pausing to see if I got a good photo or not I noticed the street performer on the right. He was playing a bluesy riff and absolutely killing it! Since he was pretty good I stopped to talk chat. He was a nice dude. Here is a link to a video on his Facebook page of him rocking out. If you want to find more stuff by him lookup Neo Hendrix.

Also, take a look at the blocked off area to the right of the photo above. 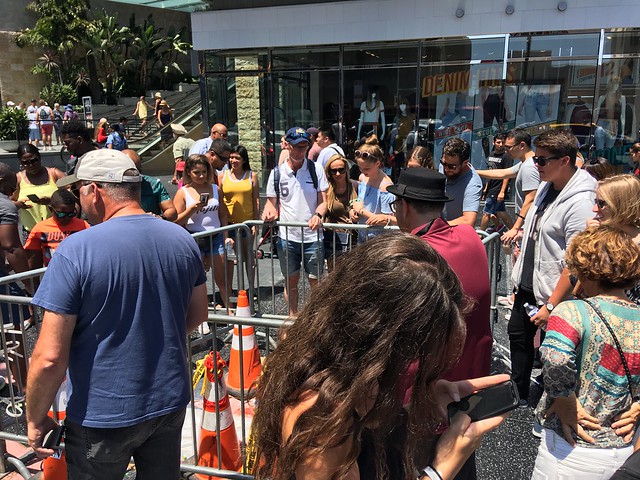 Here is a better look at the blocked off area. That was Donald Trump’s star on The Walk of Fame. Less than a week before my visit the star was vandalized. Funny thing is, there are probably more people around it than if it were not vandalized. Ain’t that some shit. As of now it is up in the air whether or not the star will be replaced. 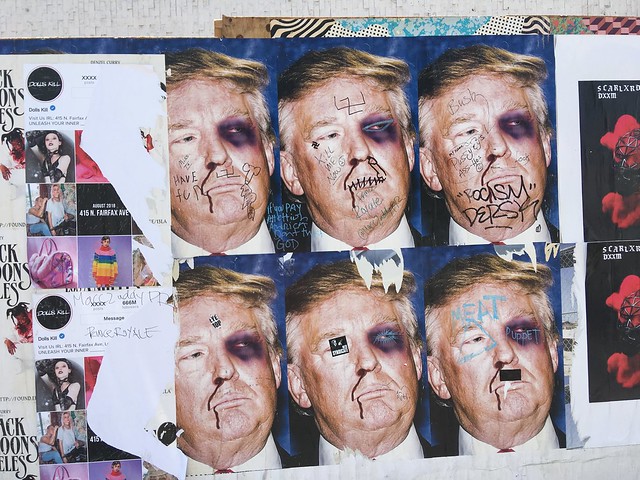 A photo from a little earlier in my walk, but I figured that this is a better spot to place it in the article. Wow, look at all those dicks and Nazi symbols. Man, people really don’t like Donald Trump here…? 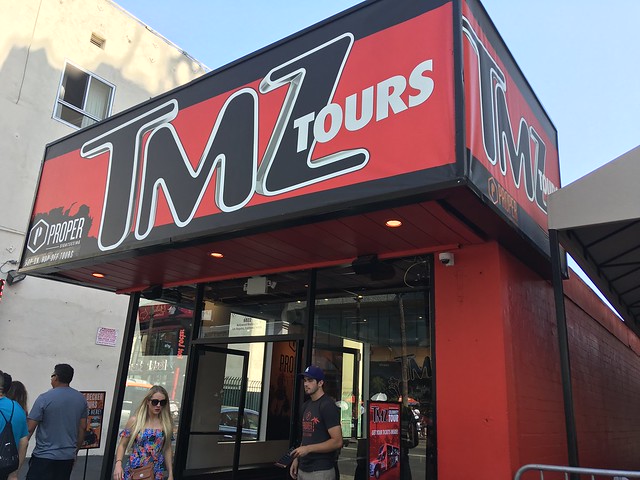 Across the way from the Trump star is the TMZ tour headquarters. Also much like Times Square and the Las Vegas strip there were tons of people passing out flyers for tours. Shooting this photo of the TMZ location made me feel like I was TMZ’ing TMZ. Take that! 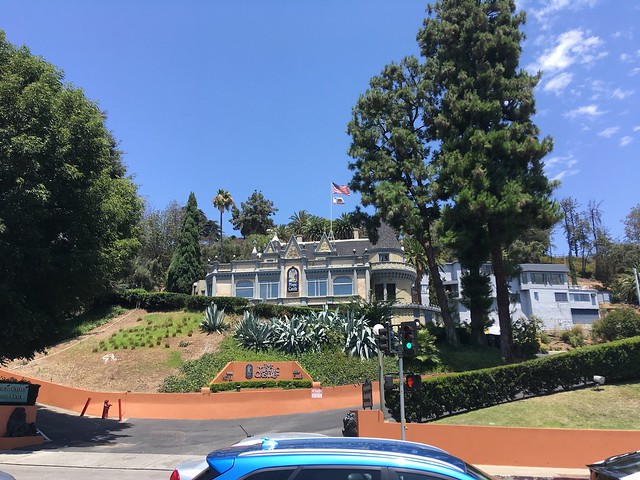 The last thing on this block was kind of off the beaten path. It is The Magic Castle Hotel and Club. From my understanding it’s an club for magicians. Much nicer than that Magic Castle hotel in Florida…

Alright, so on page two will continue, cross over the street to the next block and see some of the rest of the noteworthy locations.

This Andre The Giant Art And Other Wrestling Gods Collages