The very first article here on Unruly Stowaway sort of mocked ghostly encounters. Let me just say, never again. This article tells of the ghostly encounter which completely changed my feelings on the existance of the paranormal.

Airbnb can sometimes turn out horrible

It all started on New Years Day when the old woman who lived as the on-site-caretaker in the Airbnb I’d rented got piss-ass drunk and proceeded to parade around the house stark naked. (And when I say “piss-ass,” I mean it literally. She peed in several rooms where pee should not be.)

That was my first, and also last in that accommodation. To make a long story short, I bailed immediately and got on the phone with Airbnb to get a refund. By the time I got everything straightened out it was around 9 at night. Left with nowhere to stay that night I began looking for hotels. One that looked decent and was pretty close by was the Best Western Rivershone in Oregon City.

Getting to the hotel

It had been a rough week already. I’d been pretty sick for a few days then while traveling, didn’t sleep well that night before, and after leaving the original accommodation spent way too long on the phone with Airbnb customer service. (Maybe I’ll do a more in-depth article about the Airbnb fiasco some day soon.) All I wanted to do was rest and get a good nights sleep.

Once at the hotel I grabbed my bags from my car, and proceeded to the front desk to check in. The room that I ended up with was all the way on the other end of the property, room 342.

Once in my room, I got ready for bed relatively quickly. I untucked the left side of the bed where I was going to sleep, and placed my laptop, along with an opened package of cough drops on the tucked side. It wasn’t long before I was in bed and sleeping.

Here’s where it gets good

At 3:30 in the morning my resting state was interrupted by what sounded like some kind of noise in my room, but I was still half asleep. What seemed like a minute or so later I was fully woken up by a very loud thump to the right of where I was.

I sat myself up and turned on the light attached to the nightstand. The first thing I noticed was that my laptop and the bag of cough drops were no longer next to me. They were on the floor.

Looking over the side of the bed the above is what I saw. At first I believed that maybe I had rustled around in my sleep and flung them off, but the right side of the bed was still completely tightly tucked. Also, if I did upend the items, I don’t think I would have pushed them so far.

This second shot is one with the mattress in it to show just how far from the bed the items ended up. That laptop is an older 13″ MacBook Pro. It’s not exactly heavy, but it is not exactly light either, and the force required for me to have flung it in my sleep if I did, did not match up to where it actually landed.

I’ve never had one seizure in my entire life, and whenever I am sleeping alone, I always sleep with junk on my bed; never before has any of it landed so far away from the bed. 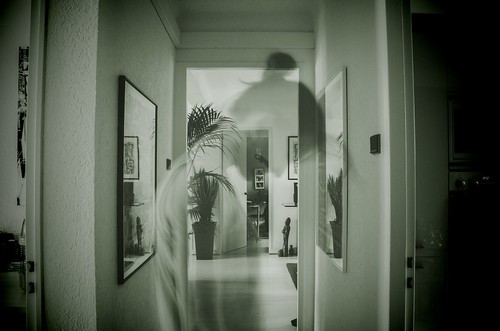 I was too spooked to just go back to bed. At the very least I decided I was going to get off of the bed and pick up my stuff. I got off the left side of my bed, walked passed the foot of the bed, and around to where the items lied.

Being that it was January and I still sick with a cold, the heat in the room was cranked up to a pretty toasty level; but it was not toasty in that corner of the room.

I quickly picked everything up, then contemplated what I should do. After two minutes of pacing, I decided to pack up.

One last time before heading out I walked back over into the cold zone. Looking down I saw something that I did not notice before.

Mostly everyone I’ve showed this too says that appears to be blood. A few people proposed that it could be rat dropping, and I have considered it, but that doesn’t fit in with everything I saw and felt surrounding this spot. Also, take another look at the photo which includes the mattress. If you look to the right of the computer, you can see this spot directly next to it.

By 3:50 I was back down at the front desk, asking the person who’d checked me in if anyone had ever mentioned this place being haunted before. For about five seconds he stared at me blank-faced.

“You don’t seem surprised at all,” I said to him.

“No, we’ve had people say things, here and there. Mostly that farthest part of the building. The maids don’t like to be there alone.”

If it was earlier in the night (or morning) I would have left and gone to another hotel. But I was tired and just wanted to try to get back to sleep as soon as I could.

“I’d like another room. Please put me in one right above you here, so that if I have a problem I can stomp on the floor, and you will know that I am being attacked by a ghost.”

He put me in a room almost right above the lobby. And in the new room I slept fine. There were no strange vibes or creepy feelings like there were in the far wing of the hotel.

So, don’t believe me? Check out this old review entitled “Nice place for a Haunted Mansion”

(Please check out the two links directly below)

Why This Photo From Christmas Eve 2017 Still Haunts Me…